Last Updated on 3 September 2019 by Badger 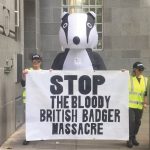 Percy has made his way to the Department for Environment Food & Rural Affairs (Defra) and right next-door, was the National Farmers’ Union.

Faced with prejudice and strong political lobbying, it’s increasingly difficult for British badgers to have their voices heard. So Percy had no choice but to pay them a visit.

Whilst the Government claims the public find it acceptable for badgers to suffer ‘marked pain’ for up to five mins, we believe many people would not agree if they knew what was going on.

Percy delivered his letter to both the NFU and DEFRA reminding them that the badger cull policy is inhumane, immoral and unnecessary.

Now he’s off again…he really is a #badgeronamission !

We urge people to watch this video to learn about the horrendous cruelty involved with ‘free shooting’.

The video does not contain graphic images, but does give a text and narrative transcript of an officially monitored badger kill in 2013. Then scroll down to read the letters.

To the British Veterinary Association

To the National Farmers’ Union

To the Royal College of Veterinary Surgeons