Last Updated on 4 September 2020 by Badger 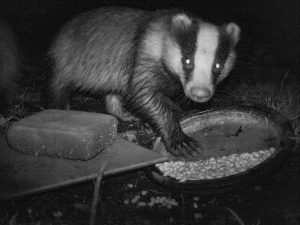 Bank Holiday Monday, and I am as restless as the skeins of geese. Their haunting cries reflect my mood. This is the day before the badger killing starts.

Across England, tens of thousands will be slaughtered in the biggest Government-led initiative to eradicate a native mammal since the 19th century extirpation of the wolf in North America and Mexico. Just a quick look at the history of the grey wolf and livestock owners shows so many parallels with the recent demonization of badgers in this country.

Now, for the first time since the culls began in 2013, all of Somerset will be under one badger-cull licence or another. And this year will be the first where my badgers are on the front line.

Storm clouds pile up in the sky above. And as I look at the trail camera footage of our badgers from the night before, I can’t enjoy their antics. Instead I am sad, tense and angry. For the next six weeks, every morning will be fraught with worry? What if the badgers don’t come one night? Then two?

Not only do I care about their fate but I also think about all the other people whose happiness and joy in sharing their world with badgers is about to be profoundly affected by this slaughter. Yet amongst the shrill voices of those demanding the badger cull, the Government has deliberately chosen to forget us.

I have no idea what will happen in the next six weeks but sharing my story will, I hope, give everyone a taste of what it’s like for both badgers and people to live on the front line.