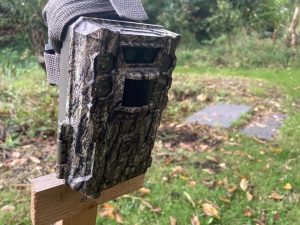 An emptiness has descended on our garden and in our hearts.   No badgers for the second night running.   Dry-mouthed and worried, neither my partner or I could sleep.   So, what to do?

He chose to spend hours walking the fields and scanning from vantage points to see if he could hear or see anything untoward.   It was wet, misty and distant traffic noise was muffled.

He saw a tawny owl, barn owl, fox and rabbits but the landscape was bereft of badgers.

I tried not to look out at the empty garden and, instead, caught up with Badger World social media and as the grey dawn broke, I went out to check setts.   So much rain and leaf fall makes it harder than normal to assess badger activity but all looked ok.   No sign of suspicious human activity anywhere.   I walked for miles trying to clear my head.

Although the malevolent fools in the government put a £0 value on a badger’s life when, early on in the cull, a cost benefit assessment was made for badger culling we both agree badgers mean the world to us.   And their value is priceless.

Like so many people, we live in an area that’s fairly inimical to wildlife.   Rye grass deserts, flailed hedges, heavy stocking rates of cattle held behind electric fences eating grass sloshed with excrement and urine from those packed in front of them, slurry sprayed from TB breakdown farms over field after field, streams polluted with nitrate run-off.

And yet.   And yet.   We have badgers.   And now the government and farming groups are taking those away from us too.   Now our trail camera waits for the third night .  .  .   maybe our luck will change.

Thanks for all your messages of hope so fingers crossed and let’s see what the morning brings.