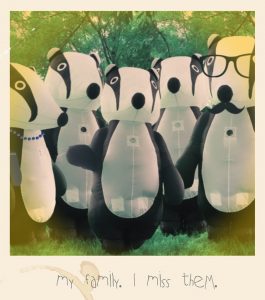 Percy is a Somerset badger.  He and his family had lived happily in some beautiful Somerset woodland for centuries.

But his world changed when the heinous, immoral, unscientific and unnecessary badger cull started.

Cullers wiped his family out, leaving Percy as the only survivor.

Despite this awful experience, Percy knows that some humans are friends to badgers.

It’s been over a year now since a very shy Percy got involved with campaigning against the badger cull. He’s grown in confidence since then, progressing from his first silent movie, to his first ‘talkie’ to even singing for Sir Paul McCartney.

Keep up with what Percy’s up to through his Facebook feed.

Percy was delighted to hear about the Lockdown Virtual Demo Against Badger Culling. Please head over to the page (link in comments) and join in. Thank you!

Please sign/share, and don’t forget to click the link in the response you receive to confirm your email address/signature! petition.parliament.uk/petitions/310307

Everyone knows that badgers like beetles, however Percy prefers singing along to The Beatles. At least he did until he heard that Sir Paul McCartney, animal advocate, had accepted an invitation to headline at Glastonbury next year. Sir Paul is well aware of Michael Eavis's position on the badger cull, having consulted with Brian May prior to accepting the opportunity. Percy is sorely disappointed and so has penned a little ditty to former idol, Sir Paul in the hope that it reaches him and makes him reconsider. #boycottglastonbury #badgeronamission

There was something akin to terror at Tory central offices in Bridgwater last saturday as Conservative party staff dialled 999 and called for Police assistance when a giant badger appeared outside. The Tories who support the controversial badger cull, must have felt their come-uppance was nigh and a...

Percy’s in The Canary! We’re sure there’ll be lots of red faces at 16 Northgate, Bridgwater. Don’t diss the badger.

Another campaign disaster for the Tories

Following his letter to Ian Liddell-Grainger, MP for Bridgwater & West Somerset, Percy and friends took to the streets yesterday to let all parties know that badgers have friends, and those friends have votes.

Percy was delighted to meet with candidates and representatives from Labour, the Lib Dems and the Greens. Keeping with current form, there was no official show from the Conservatives. However one Tory rep briefly showed his face when he ran out from the Conservative constituency office to STEAL Percy’s banners which were on the public path outside! The man, who we believe to be Jonathan Fraser-Howells, called 999 and an emergency response team was sent out. No action was taken regarding the Tory reps complaints (whatever they may have been?!) however they did ensure that he returned our stolen property.

You can take our banners but you cannot take our freedom to protest!

Percy has written to the elusive Ian Liddell-Grainger, MP regarding his concerns for his badger family and friends, and would like to read the letter to you all. #badgeronamission