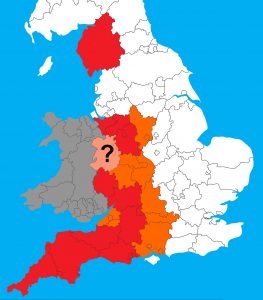 The answer is, it’s taking place in 32 zones across 11* counties.  Click here to see the licences.

The image to the left gives an indication of where culling is now taking place.

Red counties are currently culling, orange counties (that had hoped to be culling this year) may well be culling next year.

In some of the counties where culling was already taking place, new areas have been given the green light, resulting in thirty-two zones running across possibly eleven counties.

Appalling as this is, things could have been even worse.  Of the eight new counties that hoped to be included, only Staffordshire and possibly a small area of Shropshire will see culling this year.

* Cull licences do not necessarily follow county borders.  Although there is no official confirmation of culling in Shropshire, it is believed that the Staffordshire license covers some land just over the border in Shropshire.

Avon, Berkshire, Derbyshire, Hampshire, Oxfordshire and Warwickshire. will not have to face culls in their county before next year.

But illegal culling and persecution do happen, so wherever you are, stay vigilant.

Counties where culling is taking place are:

We’ve been doing some number crunching and the results don’t make for good reading.

The following figures exclude the original West Somerset and West Gloucestershire zones which are running on supplementary licences and Cumbria which has not been set minimum and maximum targets.

One of the new Devon zones has the lowest minimum of zero and the new Cornwall zone has the highest maximum of 4,658.

The count below is based on the county name given in the licence.  It does not take account of the fact that some licences run over county borders.  Where this happens, the licence is issued under the name of the county with the largest amount of land covered by that licence.

To find your local badger protector group, visit our ‘contact other areas‘ page.