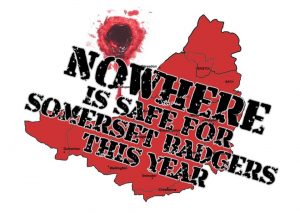 With the start of the main 6 week badger culls just days away, we’ve learned ALL of Somerset is likely to be culling. This means almost nowhere is safe for badgers in Somerset.

A variety of sources strongly suggest that September 2020 will be the first year that the whole of Somerset is subjected to badger culling. That means badgers could be killed on the outskirts of Bristol and Bath all the way down south to the Devon border.

This Somerset cull zone will also stretch from the Bristol Channel in the west to the Wiltshire border in the east. Every single village and town may have cull operatives passing through early morning or late at night whilst cage trapping and shooting could happen in the fields behind your house. Lack of clarity and transparency driven by the National Farmers Union, aided and abetted by the Government, means you will not know.

Almost nowhere is safe for badgers in Somerset

However, badgers are safe on National Trust land (both tenanted and untenanted), Wildlife Trust land, Woodland Trust reserves, RSPB and Butterfly Conservation reserves. And there will be non-participating landowners that have refused to take part in the cull.

For those of that can get out, this is the year to organise your own badger patrol. Choose a network of footpaths and get out there. Evenings are the best time but early mornings are effective too. It only takes two or three people – so, if you’ve not been able to travel to a cull zone before, now you don’t need to. The cull is on your doorstep.