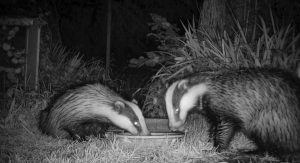 Ever since our badgers suddenly stopped coming into our garden, life has become increasingly topsy turvy.

After an absence that lasted two nights, two badgers returned and our spirits soared.   But then, another night with no badgers.   And then a night with one badger.

For well over a week, we’ve had (at best) three badgers visiting our garden instead of the normal five or six.   We’ve never heard a shot or seen anything or anyone out and about acting in a suspicious way.

Unfortunately, our landowners are away so, with mounting anxiety, we’ve not been able to ask them whether they’ve signed up to the cull.

However, neighbouring setts look active so maybe with a change of season in the air, our badgers’ behaviour has altered.   Or maybe two or three have, somehow, been killed on our watch.   We live with the guilt that we’ve let them down.   Yet we are out every night patrolling, watching, monitoring.   Apart from fireworks, we’re not hearing any sounds of shots either suppressed or not.

Living in a cull zone is like life under an alien occupation – one begins to question every tyre track.   Every vehicle looks suspicious – is it a spotter car? A shooter’s car? A dog walker with a bag – is that peanuts he’s going to put out somewhere nearby? Is that weird-looking van travelling at high speed late at night transporting badger bodies or is it actually going to fly tip up the lane?

Or neither of those things? Is it better to be watching some anodyne junk on the television rather than walking through the fields, bedazzled by starlight and startled by the sudden squeak of a tawny owl in the trees?

Our answer is unequivocal.   It’s far, far better to do something than nothing.   Although it’s a cliché, winning is not giving up.

And, thank goodness, we’re not alone in our quest to look after badgers the very best we can.   That, amongst other things, gives us hope.